How to Enjoy Munich’s Oktoberfest Without Beer!

If you are already in Munich, or planning on visiting it later this year, let me tell you that there are lots of things to do and explore in this wonderful German city besides the beer hall, in fact, the two times that I’ve visited it, I never went to the Hofbrauhaus. The beer gardens of Munich

Munich is located in the Bavaria region of Germany (if you’re traveling from Berlin, be sure to experience the many things to do in Dresden for a day trip!) and it is one of the most prosperous cities in the area, often considered as its cultural capital.

While not as a plentiful as Berlin in terms of Museums and attractions, Munich has its own unique kind of charm, making it my favorite German city by far.

Here’s a list of the many things you can do in Munich while sober! A beerless day at Munich

The heart of Munich resides in the Marieplatz, one of the most beautiful plazas in all of Europe. Here you can find exquisite restaurants, authentic German breweries, splendid fountains and of course, the main attraction:

The old Town Hall, everyday at noon there’s a special show where the little figures of the huge clock tower come out to dance and sing, it is a very funny experience and you definitely shouldn’t miss it!

For a small fee you can take the elevator up to the last floor of the Old City Hall where you can enjoy breath-taking views of the Historical center of Munich, one of the most beautiful buildings is the Frauenkirche, Munich’s Cathedral, uniquely shaped with two dome-like towers and a red-tile roof over the main structure.

Around the same area, you can find the New City Hall as well as the street market, where you can buy flowers and other type of souvenirs, most of them of the wooden kind. Be on the look out for a statue of Juliet from Shakespeare’s Romeo and Juliet, this is a replica of the one located in Verona, Italy (twin city of Munich), it is a local tradition to grab her breasts wishing for ever-lasting love. Too bad it didn’t work out for her!

From the Marienplatz, you can easily reach by foot the second most important plaza of Munich: The Odeonplatz. Here, it is not rare to find people in costumes performing traditional Bavarian dances in front of the Yellow Church, the Theatinerkirche.

If you’ve ever been to Florence, you might find something similar in the structure located right next to the plaza, it is, indeed, a replica of the Loggia dei Lanzi (complete with the Medici lions!), known as the Feldherrnhalle. Among the many cultural and historical places in the center of Munich, the most important is the Munich Residenz, for many generations, up until the creation of the German Empire, this was the home of the Bavarian Monarchs. Inside you can find grandiose decorations, interesting sculptures and reliefs as well as the Treasury.

The combined ticket to the Palace and the Treasury also allows you to enter the Cuvilliés Theatre, be warned that the visiting hours are kind of unusual and can change without previous warnings. While the theatre is majestic and richly decorated, it is entirely skippable if you have already visited any German Opera House.

I would rather suggest you to spend more time in the palace itself, specially in The Hall of Antiquities, a massive vault with frescos and canvas all over it, containing treasures from all over the world such as Ming porcelain vases. If your cup of tea is more inclined for ancient cultures and civilizations, Munich’s Glyphotek is a truly must-go. While the building was badly damaged during WWII, the sculptures themselves were safely stored and protected. Inside you will find lots of Greek and Roman marble sculptures.

There’s also a recreation of how these sculptures looked during Greek times, did you know that all white marble statues used to be painting in bright shiny colors? The results are…rather interesting.

Let’s just say that I’m happy that time washed the color away and left them with a crisp-white majestic marble look! A normal sunny day in Munich

What to do and see in Munich beyond the Historical Center

If you are looking for a nice relaxed day, you can use the subway to reach the Olympic Park and the adjacent lake. It was in this complex that the Olympic Games of 1972 took place.

Said games were forever tainted in tragedy when a terrorist group broke into the athletes’ residence and executed Israeli sportsmen. The events of the massacre and the subsequent revenge by the Mossad (Israel Secret Police) are depicted in Steven Spielberg’s Munich movie.

Also, for all of those science enthusiasts, you can visit the Deutsches Museum, the world’s largest museum of science and technology, located in a small island near the Isar river and easily reachable by foot from the Historical Center.

Even if you don’t like science, this is definitely a nice break from visiting historical sites and/or drinking beer. And yes, of course that you can go to the legendary Hofbrauhaus and have one nice pint of beer. Or five. Yep, five sounds about right… The Town Hall of Munich

Where to stay in Munich, Germany

Accommodation in Munich is mostly focused near the train station and the city centre itself. Here’s a list of my recommendations for all types of budget.

For luxury and boutique hotels, I recommend the Platz Hotel Superior and the Rocco Forte The Charles Hotel. When it comes to budget hostels and guest houses my best choices are the Wombats City Hostel and Euro Youth Hostel. The architecture of Munich

I hope you have enjoyed this travel guide to Munich’s top attractions. Don’t forget to subscribe in order to get more awesome updates and tips straight to your e-mail!

Have you ever been to Munich? Would you like to? Share your thoughts and let me know what you think! 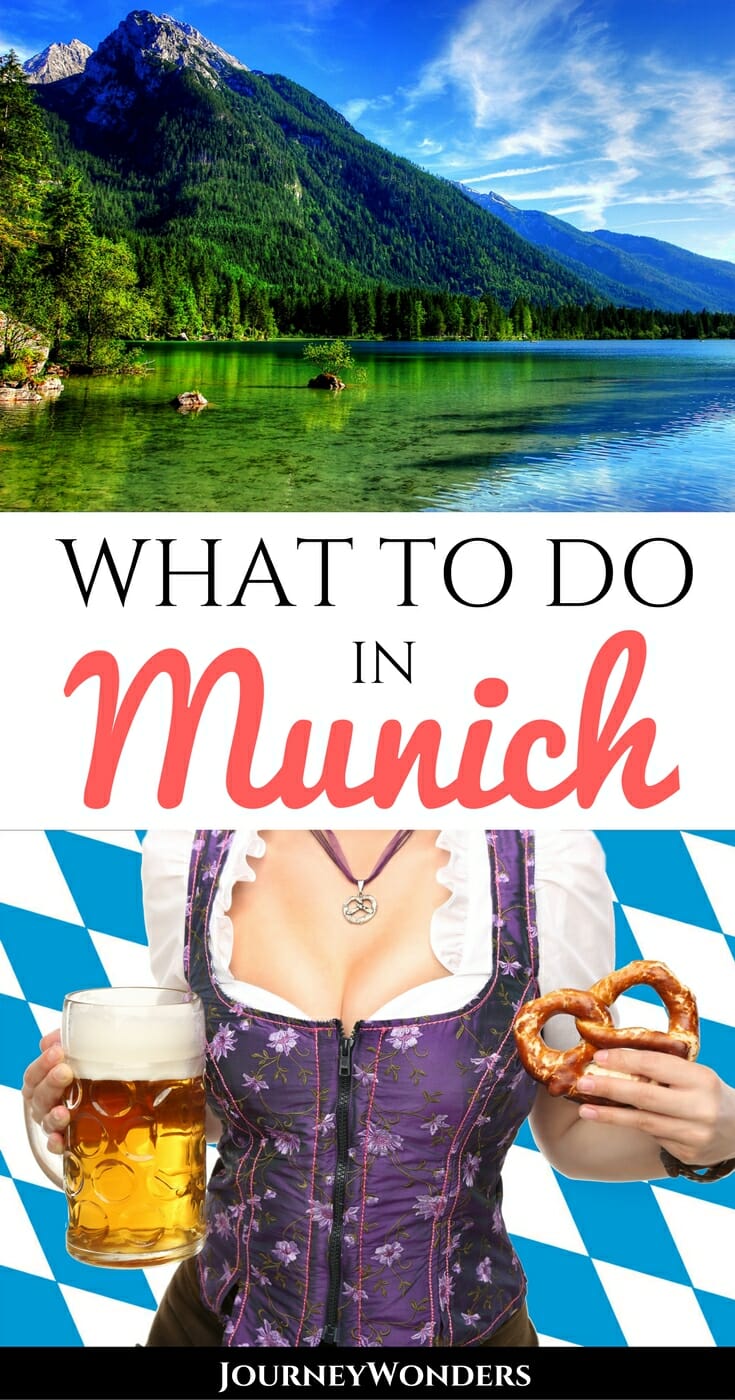