Snorkeling in Hol Chan alongside a hungry pack of sharks is probably not a good idea in most people’s minds since this is a bucket list item with the potential of actually making you kick the bucket while doing it. But hey, did you know that sharks actually like being around humans?

You see, sharks are probably the most misunderstood animals in the entire world. Sure, they are scary looking creatures with sharp teeth. However, with the exception of the Great White, sharks normally just ignore humans since only small prey activates their predatory instincts.

Last week I was in Caye Caulker, a small island in the Belizean Caribbean and I had the pleasure of being invited by Raggamuffin Tours to sail with them to Hol Chan, a natural reserve with abundant marine life.

The highlight of the tour is without any doubt a place dubbed as the “Shark and Ray alley”, where you’ll find packs of nurse sharks (seriously, sharks go to medical school now?) and sting rays.

Yes, your mind will be telling you not to jump into the water. After all, the song of Steven Spielberg’s Jaws is probably resonating in your head and your heart is racing as you approach the hungry packs of sharks and then…it all seems so poetically quiet.

In a sudden moment, the great menacing creature seemed as harmless as a puppy. One of them even came close and basically asked me to pet it. Feeling the rough skin of the shark with my bare hands was absolutely amazing!

Want to dive with even more sharks? How about diving with bull sharks in Playa del Carmen my wonder friends?

After conquering the fear of sharks it was time to depart for the next snorkeling spot: The Belize Coral Reef, rivaled in size only by the one at Australia. It really helps to have a good guide in this area since he can show you all of the hidden animals that lie in the bottom of the ocean.

Our guide, the charismatic Captain Dice, made the extra effort of actually finding each and every single animal endemic to this area so we can appreciate them the most.

Be prepared for a long swim since the area is fairly big. Here you can find eels, sharks, rays, fish and yes, sea turtles! The turtles here are so friendly that they are the ones chasing you!

Just be careful not to try to touch the eels. A friend of mine did so a few months ago and he lost his index finger because of it! To this day he still thinks of the experience as an awesome travel tale (it is not!).

My favorite part of Belize? The amazing coral formations that vary in color and shape. I specially love the one that looks like a human brain; it’s so bizarre and yet so beautiful!

Sailing with the Raggamuffin Crew

On the way back to Caye Caulker, the Raggamuffin crew offered us free rum punch, ceviche, tropical fruits and a complete meal of chicken/fish. Yes, the rum punch was unlimited so you can already imagine how drunk everybody was before sundown.

Speaking about sundown, you can also take a special tour with the same company where you sail away from Caye Caulker to watch the sunset from the middle of the ocean. Yes, there’s also unlimited rum punch and ceviche in that one too!

And yes, while I normally walk away from all sorts of organized tours, I must say that I fully endorse the quality of the Raggamuffin crew and even though the price might seem a little bit too high (70 USD for the complete day tour), it is worth every single dime. Especially because of the unlimited rum punch.

What to do and see in Caye Caulker

Caye Caulker is an extremely small island that thrives mostly by tourism. Other than snorkeling, you can relax at beach located at the split of the island. In this area you will find tons of crabs so be careful with your feet!

The rest of the island is filled with hotels, hostels, bars and restaurant, plus the classical grocery store run by a Chinese family. Seriously, why are they so good at managing these types of stores?

Prices are high (but after all, everything in Belize is expensive) so your best option is to cook something cheap at your hostel/hotel. Or try your luck and actually catch a lobster. Hm…actually that sounds better.

From Belize City you can take a 10 USD Water Taxi to Caye Caulker. From Chetumal, Mexico the Water Taxi will set you back 40 USD (plus 10 USD of the port fee). What a scam, right?

Have you ever been to Belize? Would you dare to snorkel with the nurse sharks? Do you think sharks should be allowed to medical school? Share your thoughts and let me know what you think! 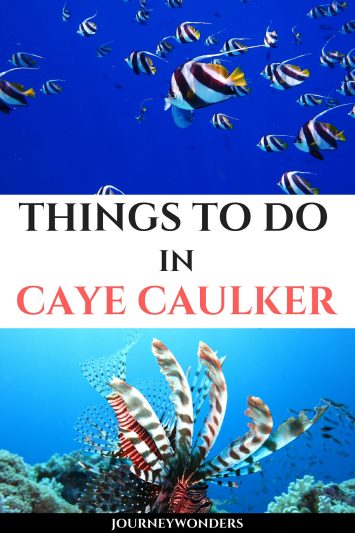