“Archeologists agree that Tikal is to New York what Copan is to Paris”, the toothless guide said as he walked frantically from one Pyramid to another. His confidence was certainly peaking that day because the French people in his group admired his wisdom and applauded his compliments to the city of love.

Sure, the guide probably had never been to Paris (or New York for that matter) but his wise words soon began to resonate with me during the rest of my visit to these Mayan ruins located in Honduras, mere minutes away from the Guatemalan border.

The stelae of Copan

You see, Copan has something very unique that sets it apart from the rest of the Pyramids of the Mayan world: Its amazingly detailed carved sculptures.

Known as stelae (singular: stela), Copan has the biggest and most beautiful assortment of human sized sculptures in Mesoamerica. Each stela depicts an ancient ruler of the Mayan civilization, the most famous one being 18 Conejos (18 Rabbit).

The fact that this guy chose a rabbit as his symbol instead of a jaguar or a macaw still baffles me.

It is truly surprising to know that instead of being stored away in a museum, said sculptures are actually out in the open for everyone to admire right next to the Pyramids, thus, creating an accurate representation of what life in ancient times looked like. Some of the statues are really funny too! I couldn’t help but think of Pharrell’s latest song when I saw this guy over here!

The Macaw Mountain and Copan

Copan is also very unique because of two distinct features: The red macaws and the military guardsmen. Yes, you heard that right. Let’s start with the basics.

Honduras is home to one of the most beautiful birds in the world: the red macaw. Sadly, people often hunt them for their beautiful feathers or worse still, to keep them locked up as pets (after clipping off their wings to ensure they won’t try to escape).

Luckily, there are institutions such as the Macaw Mountain that specializes in rescuing macaws and training them until they are ready to live in the wild again.

And yes, the Mayan ruins of Copan were chosen as a mid-way facility where the macaws of Macaw Mountain are released into the wild without losing basic comforts such as food and water.  They stay here to breed until they wander off into the wilderness of the Honduran countryside to start their own families.

The first thing you’ll hear after entering the ruins will be the distinct roar of the macaws. Don’t be scared, they don’t bite! At Macaw Mountain you can even interact with some of them and take all sorts of awesome photos. Be warned though, macaws will definitely try to eat your camera if you get too close to their faces.

Honduras, Copan and the Civil War

So how about the military men then? Honduras is a very misunderstood country since they just recently had a military coup in 2009. It is perfectly normal to see military men watching over the city and yes, even inside the Mayan ruins themselves! To be honest, I’m not sure if they are there to protect the visitors or to watch them. Probably both.

That being said, the touristy parts of Honduras are perfectly safe for visitors and crime against foreigners is extremely rare. The town of Copan Ruinas, located 20 minutes from the Guatemalan border and 5 minutes from the ruins themselves is a fine example of peace and stability in Honduras.

Sure, infrastructure and development are extremely lacking (it is perfectly common to have at least three blackouts per day) but I’ve never felt safer before while walking in the middle of pitch-black darkness. Unfortunately, most visitors to Copan will never see this town since they will often visit the ruins in a long day-trip leaving Antigua, Guatemala at 4 am, arriving to the ruins at 11 am and returning to Guatemala at 4 pm.

Me? I spent three nights in this lovely town to explore each and every inch of the Mayan ruins and to relax in this small land of paradise located away from the general chaos of Honduras. So yes, Copan is very safe to visit and yes, the military men are always happy to be featured in a selfie with you. Say cheese!

The sculpture museum and the Sepulturas of Copan

Other then the main Mayan ruins, there are two more archeological attractions to be found in this area. One is the sculpture museum (which requires a separate entrance ticket) and the other is the archeological complex of “Las Sepulturas”, located some 30 minutes away by foot from the main ruins.

As I said before, most of the stelae are actually out in the open in the main complex of Copan but the replica temple inside the sculpture museum will certainly blow your mind. Sure, right now most Pyramids are Temples are grey dull pieces of rock, but did you know that they use to be colorful masterpieces of richly detailed art once upon a time?

If you’re looking for a off-the-beaten-path archeological destination in Copan, Las Sepulturas (the burial site, in Spanish) are definitely going to be your favorite ones. Located right next to a river, the main highlight of this place is the fact that they are secluded enough to make you believe that you’re Indiana Jones journeying on to his next adventure.

Other than the wildlife, which includes worms, bees, frogs and lizards, I only encountered two more humans in this complex. Of course, both of them worked there. If you want to have the experience of having a huge Mayan archeological site all for yourself, Las Sepulturas is the best place to visit without any doubt!

Where to stay in Copan Ruinas

There are basically only four hostels and a couple of hotels in the main town of Copan Ruinas. I was invited to stay for two nights at the Hotel Plaza Copan, a lovely hotel located right next to the cathedral. You can actually see the cathedral from the pool area. Speaking about pools, I always tend to find places that have one, specially because of the intense heat of Central America! And yes, they have a power generator so you don’t have to worry about the blackouts!

So how long should you stay in Copan? Sure, in theory you could see all of the sights of Copan in one day or two but you’ll fall so much in love with the relaxed way of life that you’ll probably want to stay longer in this place! In fact, there is a quite sizable number of expats who have made Copan their home and now they either teach English to kids or run small business all over the town.

Sadly, most people tend to skip Honduras and El Salvador altogether and choose to travel directly from Guatemala to Nicaragua but trust me, Copan Ruinas has the potential of being the highlight of your Central American journey of wonders.

To get here you can take a direct 20 USD shuttle from Antigua, Guatemala leaving at 4 am or you can do it yourself by taking a combination of chicken buses: Antigua-Chiquimula-El Florido-Copan. The total cost will be around 1 to 2 USD for each transfer.

Have you ever heard about Copan Ruinas, Honduras? Would you like to visit? Do you love macaws? Share your thoughts and let me know what you think! 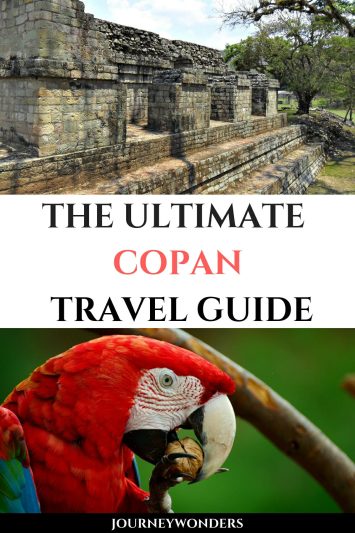