The Mayan ruins of Tikal were definitely one of the highlights of Central American journey of wonders. Located in the lush Mayan jungle of Guatemala, they offer a great insight to the daily life of the ancient Mayan civilization that once inhabited these lands.

I hope you enjoy this amazing travel guide to the Mayan ruins to Tikal and yes, be warned that there is a tarantula photo that will leave you speechless!

A brief story of Tikal

With an architectural style and setting that might remind you of the Mayan ruins of Palenque, the Pyramids of Tikal are somewhat different in the sense that they are very tall and not so broad, giving a clean unique look that you will only find here.

In the centuries before the Spanish conquest, Tikal was a thriving city where thousands of Mayans lived.

However, exploitation of the natural resources of the area and overpopulation ended up dooming this magnificent site and it was soon completely abandoned as the Mayans scattered to other areas.

A few decades ago, archaeologist began to invest their time restoring the Pyramids of Tikal and in order to do so, they evicted the modern-day Guatemalans that had settled there.  The restoration got so out of hand that Pyramid I (Temple of the Jaguar) was 100% exposed, which ended up causing some damage to it.

Today that is the only one that you cannot climb along with Temple III. You can go up to Temple II and IV but only through a modern wooden scaffold so it really takes away some of the authenticity factor.

From above Temple II, you can get a very good panoramic view of Temple I and the main plaza of Tikal.

It was here that the main city life was happening and yes, according to our guide, those rounded stones were actually used for human sacrifices. This is very different from the methods used in the Yucatan peninsula where the sacrificed were thrown to the cenotes.

The estelas (rectangular vertical stone labs) in front of them represent depictions of the ancient rulers of Tikal, the most famous being the King Chocolate. I wonder if he was as tasty as his name would

The wildlife of Tikal is the most diverse one of all the Mayan sites. On a good sunny day you will be able to see raccoons, howler monkeys, spider monkeys, exotic birds such as toucans, bees and yes…tarantulas.

Our guide was probably off his meds when he reached for a hole in the ground to show us a tarantula. What followed after was probably one of the most crazy things I’ve ever seen on my life. Would you dare to do this?

On an average day, most tourists arrive as early as opening time (8:00 am) while some even earlier to watch the sunrise from atop the Pyramids. Most groups leave around noon so you can stay longer if you want and be able to have the ruins all for yourself.

Yes, Tikal is a mess in those early hours of the mornings but it completely changes when the mass tourism leaves. Plus, you don’t really want a lot of people to photobomb your selfie, do you?

Are you a big Star Wars fan? If you are you probably remember the planet of Yavin IV in the first movie of the original trilogy. It was here that the rebels had their base in order to organize the big battle against the Empire.

The establishing shot of the planet might seem eerily familiar to you once you have climbed the Pyramid IV of Tikal….

How to get to Tikal

From Flores, you can take any of the tour shuttles for 80 quetzals round trip. It’s an open-return so you can come back almost every two hours. Alternatively, you can pay 30 quetzals for a one way ride from Santa Elena’s bus station but the journey takes one extra hour and it’s not really worth it.

If you’re starting your journey from Guatemala/Antigua, you have basically two options. One is to use a flight search website such as Skyscanner to find a cheap flight between Guatemala and Tikal while the other is to take the overnight bus of Linea Dorada that runs from Guatemala City to Flores and back.

The night bus takes about 10 hours and costs 190 quetzals.

My experience in Tikal was absolutely breath-taking. If you think that this is just “another Mayan Pyramid” then you’re clearly in the wrong. Tikal is not only about the architecture or the history, it’s about the wildlife, the view and yes, the chance of having a beer after hours of walking.

How awesome is that?

I would definitely recommend you to take the complete package leaving from Flores (80 quetzals transportation + 50 quetzals for a guide) and then stay for at least three hours after the tour is finished in order to explore Tikal at your own pace and yes, to take lots and lots of Mayan selfies.

Have you ever been to Tikal? Would you like to? Is the Mayan guide with the tarantula crazy or awesome? Share your thoughts and let me know what you think! 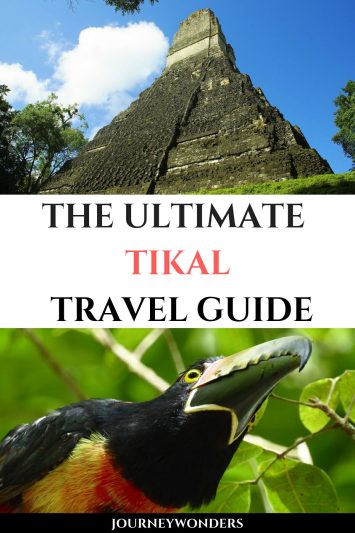