Whenever an acquaintance of mine tells me about their plan to save money in order to travel around the world 10 years from now, I cannot help but feel bad about their mentality.

Why is that? Not only because it is possible to afford traveling around the world right now (have you taken note of my 7 tips to travel more?) but also because traveling will be so much different 10 years from now…and not in a good way. The time to travel is NOW.

If you don’t believe it, here’s 5 reasons why:

1. Mass tourism will end up polluting the world

The time to travel is NOW. Without making any judgements or trying to separate myself from the rest (after all, we are ALL visitors, travelers AND tourists), I have to admit that the carbon footprint we’re leaving is a very significant one.

Not only that, but, as the average purchasing power of the world is increasing and as people start to learn how to travel more for less (thanks to this site!), a bigger portion of the middle class will now be able to afford to travel anywhere in the world, encouraging airlines to create new routes in order to deal with the demand.

I wouldn’t be surprised if there were 50 daily flights from London to Siem Reap (check out my Alternative Guide to Siem Reap!) in the future! Trust me, the time to travel is NOW.

2. International relations might not be as good as they are now

The time to travel is NOW. Let’s admit it, as of 2012, the world was at the best stage of international relations in the complete history of humankind. Can you imagine the hassle that an American citizen had to endure in order to do some sight-seeing in Moscow during the Cold War? How about backpacking throughout China during the days of Mao’s revolution?

If getting visas for Asia is a headache now, can you imagine traveling within Europe before the days of the EU? The world changed for the better and today you can even visit North-Korea as long as you do so with an organized tour!

Sadly, the trend seems to be going backwards. As of 2014, international tensions between the West and the East rise at the same time that illegal immigration reaches a crucial point in human history, the most logical outcome is for countries to start protecting themselves against the rest of the world.

I wouldn’t be surprised if the United Kingdom started asking tourist visas to all non-EU countries once it realizes how their local economy has been affected by mass immigration.

Today, David Cameron is even trying to stop Romanians and Bulgarians (both EU members) from visiting and working in the UK! Trust me, the time to travel is NOW.

The time to travel is NOW. Without sounding pessimistic, let’s take a look at the facts: The Great Coral Reef is going to disappear by 2050, Venice is slowly sinking into the ocean, the Peruvian government is now limiting the number of daily visitors to Machu Picchu, some Mayan Pyramids can no longer be climbed.

The Taj Mahal is changing colors due to corrosion and acid rains, the stone city of Petra is dying due to erosion and who knows how many animals will become extinct in the following decades.

Yes, I understand the big contradiction. After all, mass tourism (of which we all take part) is one of the reasons why most of these world monuments are now threatened. And yet, the selfish idealist in me wants YOU to see them before they are closed-off for good or even worse, destroyed.

Yes, maybe stopping people from seeing them now is the best option. Maybe… but until that happens, I would love for all of my readers to experience the amazingly rich cultural heritage that humankind has left us before it’s too late. Trust me, the time to travel is NOW.

The time to travel is NOW. Once, I met a 70-year old traveler who complained about how “every Indian wears jeans and t-shirts now” and how back in the day everything was more authentic.

Of course, his comment was out of the line and borderline-racist. “I’m sorry that globalization and economic development is ruining your travel experience” I told him in a very snarky way. And yet, I began to reflect about his words.

In rural Mexico, it is still somewhat common to find Indigenous women wearing traditional clothing and men wearing a big nice sombrero as they ride their donkey to work. But this is slowly changing. Those Mexican cultural dances that you see at the theatre?

The performers are college-educated people who bear no link whatsoever to the folklore that the dance showcases. In a few years, the traditional dresses will be confined to touristy places while the people who originally wore them will walk the streets wearing jeans and t-shirts. Those hand-made Mexican souvenirs? They’ll be mass-produced in China (some of them already are)!!!

Trust me, the time to travel is NOW.

5. It might actually be cheaper to travel…but prices will increase once you reach your destination

The time to travel is NOW. Common sense says that in the future, the act of traveling will become cheaper since both the supply and demand will increase at the same time that technological advances (such as Virgin Galactic by Richard Branson) will reduce the time and costs of traveling from point A to point B.

In fact, the owner of Ryanair just announced his plans to offer 10 USD tickets from Europe to the US (seriously, Google it)! Saving money to travel in the future makes sense because you’ll spend less on airfare but…

The prices of hotels/hostels, food, ground transportation and almost everything else will increase and not only because of normal causes like inflation. As I said before, the purchasing power of developing countries is increasing and I have no doubt that in the future, they will be getting real close to the purchasing power of First-World countries.

Suddenly, your dream vacation in Thailand will be as expensive as if you had decided to vacation in Japan. Right now there is a big wealth disparity between developed and developing countries…but the gap is due to become smaller and smaller as time passes by. If you’re saving money now with the goal of traveling to non-expensive countries…you better think twice. Trust me, the time to travel is NOW.

Travel now or regret it later. Are you ready to take the leap today? 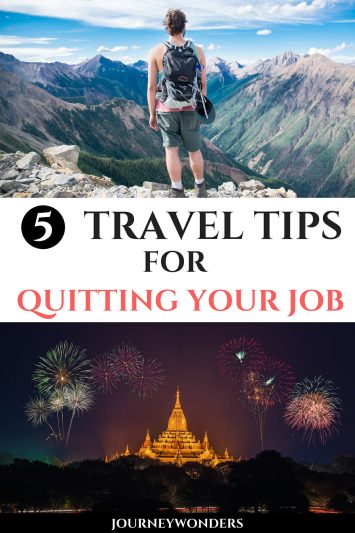