Cinco De Mayo: 5 Myths and Facts to Marvel You

This is it folks, I hope you’re ready for Cinco de Mayo because tomorrow is the biggest celebration of all Mexican story…except it’s not. Sorry to break it to you but we Mexicans simply don’t care about Cinco de Mayo.

Here’s the five most common myths about Cinco de Mayo and why we Mexicans just care about the fact that we don’t have to go to school that day. Enjoy!

The Cinco de Mayo is not the Mexican equivalent to the Fourth of July (that’s the 16th of September for us by the way). Cinco de Mayo is about “La Batalla de Puebla” (The battle of Puebla) of 1862.

While we do care for the day of our Independence from the Spanish influence, the battle that Cinco de Mayo celebrates actually took place decades later in an unrelated conflict against the French under Napoleon the Third. Yes, the French.

It was a very significant moral boost in the sense that a rag-tag team of indigenous warriors and poorly armed Mexicans soldiers defeated what was considered at the time as the strongest military force ever to exist…except said victory was completely irrelevant to us Mexicans in the long-term.

For the Americans? Yes. For the French? Maybe. For the Mexicans? Not so much. Long story short? Napoleon the Third wanted to create a buffer state in Mexico in order to fight against the ongoing expansionism of the USA and to help the Confederate army during the American Civil War. The Cinco de Mayo History is definitely an interesting one.

Mexico was never the real objective and yet, the French came back two years later after the Cinco de Mayo and kicked our butts to oblivion. Did you know that for a couple of years we were actually ruled by Maximilian of Habsburg?

Yes, a pale Austrian dude was the Emperor of Mexico for a short-time. Can you believe it?

Other than the traditional recreation of the Battle of Puebla in the forts located within said city, most (all?) Mexicans only care about the fact that there’s no school and that in some years, you can combine this holiday with Labor Day (1st of May) to create a big weekend getaway.

Why is Cinco de Mayo so important in the USA then?

It’s simple: If it wasn’t because the fact that we Mexicans delayed the French invasion, the French would have arrived to the continent in a crucial year (1862) of the civil war and would have undoubtedly turned the tide in favor of the Confederate Army. You’re welcome, America!

As you all know, history is very relative and falls to a grey area. Before the French invasion, Mexico had an ongoing civil war between the conservative and the liberal party (think of it as a battle between democrats and republicans if you will), the liberals, led by Benito Juarez, Mexico’s one and only Indigenous President, wanted to break all ties with the catholic church and to bring Mexico to a new era of enlightenment.

The conservative party, led by the guy who would eventually become Maximilian’s right hand, wanted to embrace the same imperialist model that had existed during colonial times and to bring an European noble to govern the country in order to bring Mexico to a new era of enlightenment.

The civil war ended in 1867, 5 years after the Cinco de Mayo. Juarez’s forces won against Maximilian’s army thanks to the fact that Napoleon the Third withdrew his troops in preparation for his decisive battle against Prussia.

So what happened to the Austrian usurper? Benito Juarez wisely responded injustice with mercy as he pardoned Maximilian and…wait, who am I kidding? We totally executed that pale guy in cold blood. Viva Mexico, uh?

Yes and no. While I do understand the importance that the Cinco de Mayo has in the Mexican communities that inhabit the USA, I fear that this celebration has become a sort of cultural appropriation used as an excuse for Americans to drink tequila (not that you need an excuse to do it) and wear a colorful sombrero (which, by the way, belong to another era of Mexican history, that is, the 1910 Mexican Revolution).

No, not at all. I just want people to understand what Cinco de Mayo is about and how it has received the Christmas effect. Did you know that one of my little cousins once told me that Christmas was about celebrating the birth of Santa Claus? Oh my!

I hope you enjoyed this informative piece about the Cinco Myths of Cinco de Mayo and yes, by all means, drink away and wear a colorful sombrero.

I know I will. 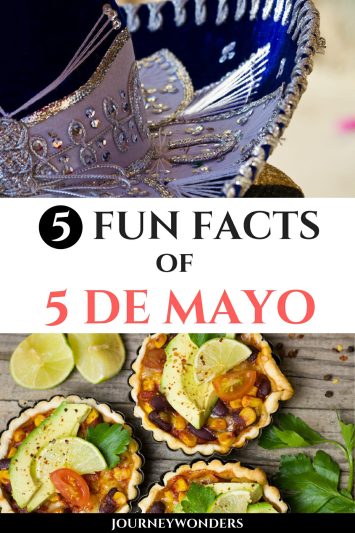