I won’t lie to you. I used to be extremely clueless when it came to exchanging foreign currency. Normally, I would just arrive to the airport or train station and directly change it at the counters without giving it a second thought, after all, it’s convenient and it’s official enough that you feel safe from any possible scam.

The problem? That was not the best way to exchange currency and so I ended up loosing money in each transaction. The worst part? I never once realized it until recently! You see, there are basically two ways of exchanging currency abroad: The convenient way and the smart way. And I’m here to share with you some of my best tips for the smart way. Enjoy!

The value of a currency is always a matter of trust. Said trust depends on many factors such as political stability, economic growth, role in the international markets, reserves and a relatively low inflation. That’s the reason why the USD is almost universally accepted while the Argentinian peso is not. Strong currencies include the USD, Euro, Japanese Yen, Sterling Pound and the Swiss Franc among others.

Currency Exchange Tip #2: Do your research when traveling to currency restrictive countries

Argentina and Venezuela are probably the best examples of countries with policies that forbid their own citizens from the free-trade of currency. Citizens of both countries need to show a proof of immediate air travel in order for them to purchase USD. Foreign visitors have no chance and are actually stuck with local currency with no way of exchanging them within the country (and if they try to do it abroad, the rate will be way lower).

On a similar note, ATM’s will give you the country’s own “imaginary rate” so you will also end up loosing money while using them. For example, an Argentinian ATM back in 2013 gave you 10 AR pesos for 1 USD. However, you as a foreigner could not buy 1 USD for 10 AR pesos since USD were restricted so you would end up stuck with AR pesos after your trip with no way of changing them back. Luckily for you, restriction creates an opportunity for black markets where you can exchange USD for AR in unofficial places for a much higher value than the one at official ones.

A few months ago, I was in Costa Rica and I made the mistake of withdrawing more money than what I needed. And since I didn’t have enough time to go to an exchange center, I decided to exchange it at the Nicaragua-Costa Rica border. The problem? The exchange rate I was offered was not as high as I hoped so I decided to ignore them and wait for El Salvador in order to exchange my Colones.

That was a big mistake. You see, the furthest that a not-so-strong currency is away from an usable place (in this case, Costa Rica and the border towns in Nicaragua and Panama), its value declines dramatically. It doesn’t matter if the Costa Rica economy is above the one of El Salvador, what matters is that a Salvadorian bank has really no use for Colones. And it makes total sense.

Currency Exchange Tip #4: Use the no-fee exchange agencies but don’t forget to double check the rate

Specially in highly touristy cities such as Prague, it is common to find no-fee currency exchange centers right next to the most famous landmarks. The problem? Their rates are astronomically absurd. One place offered to buy 1 Euro for 22 Crowns while asking 30 Crowns in order to buy 1 Euro. The official rate? 27 Crowns for 1 Euro.

Your best choice is to ask the hotel/hostel staff for the best place to get a fair exchange rate. If you’re arriving to the airport/train station and are in the need for local currency, why not ask a fellow traveler if he could exchange some coins with you at the official rate? Most of the times they will actually need the currency you have since they might be going there soon.

Whether you’re using an ATM or exchanging USD, never obtain high sums of foreign currency unless you’re actually planning on spending it. Yes, it might be tricky when you just arrive to a new destination and you don’t know exactly how much money you’re going to need but please consider the following: Currency exchange is a very profitable business.

Selling prices are way different than buying prices so during the process of exchanging USD to a foreign currency and then changing the leftovers back to USD you are already loosing money. Twice. I first realized this in Honduras when I withdrew 200 USD-worth of Lempiras (Hondura’s local currency) and only ended up spending one quarter of it so you can imagine my surprise when the exchange office at the bank gave me only 130 USD instead of the 150 USD I should have gotten.

Even if you’re not a collector, having foreign coins is always a good idea since not only it counts as a good souvenir but you can actually sell them to hardcore coin collectors, specially if they have a good design. Cuba’s Che Guevera coins go for as much as 10 times their real value in the US!

And the best part? You can use foreign coins to fight-off scam artists. Yes, you heard that right: I have found a way to scam the scammers using foreign coins. But more on that on next week’s article about travel scams.

How experienced are you when it comes to exchanging money abroad? Have you ever lost money while doing it? Did you even notice? Share your thoughts and share them with me! 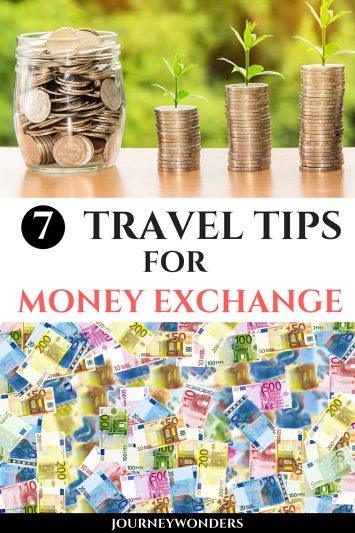