Misadventures at the Palenque Mayan Ruins in Chiapas

Located in the lush jungle of Chiapas, the Palenque Mayan Ruins will transport you back to Pre-Hispanic Mexico. Ready to explore it with the best tips?

Located in the lush jungle of Chiapas, the Palenque Mayan Ruins are one of my favorite ones in the entire country and the only ones that actually have the ability to make you feel as if you’re transported back in time.

Although the excavated portion of this archeological site is fairly small when compared to Teotihuacan or Monte Alban, the uniqueness of its setting and the quality of the stone carvings and treasures found inside the tombs really make Palenque shine above the rest of Mexico’s top pyramid sites.

I mean, look at this lush jungle surrounding the main Pyramid! How amazing is that? If you ignore the visitors with the fanny-packs and the cargo pants, you can actually feel as if you were transported back in time! 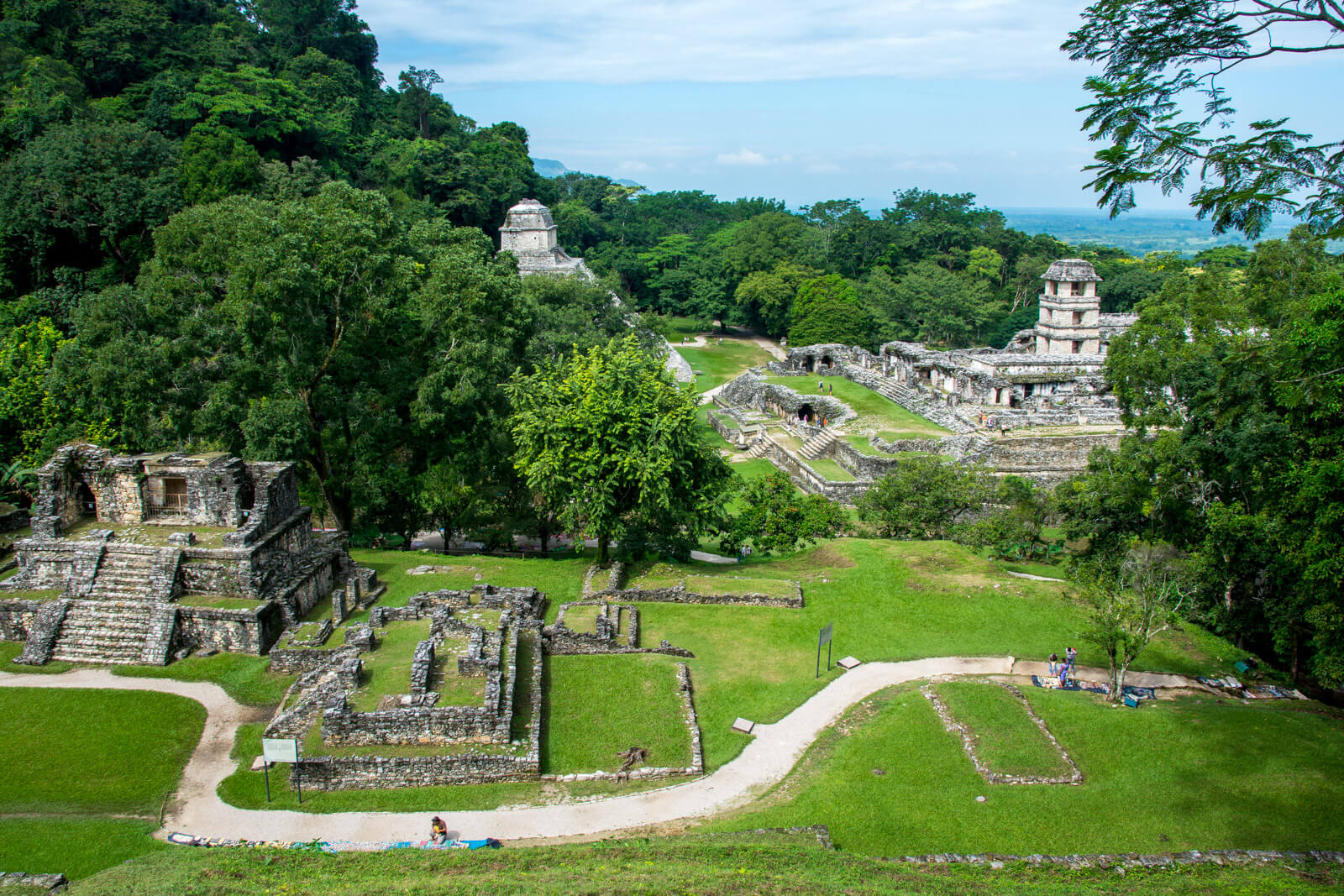 How to reach the Palenque Mayan Ruins, Chiapas

Be warned though that the buses now take a way longer route that instead of the usual 5 hours will now take 8 to 9.

What I did on my most recent visit was to partner up with Tinggly Adventures, a gift solution company for people who dream about travel and unique cultural experiences. They were very kind enough to provide my companion and I with the gift of a Tour to the Palenque Mayan Ruins (plus the Misol Ha and Agua Azul Waterfalls) from San Cristobal de las Casas.

Don’t know what to give your love one this X-Mas? How about a Tinggly voucher they can exchange for one of their hundreds tours in more than 80 countries all around the world?

While tours departing from San Cristobal de las Casas (don’t forget to check out the nearby Sumidero Canyon!!!) usually return to that magical town after visiting the ruins, you have the option of being dropped off at Palenque town in case you want to spent the night there and continue your journey to the Yucatan Peninsula. 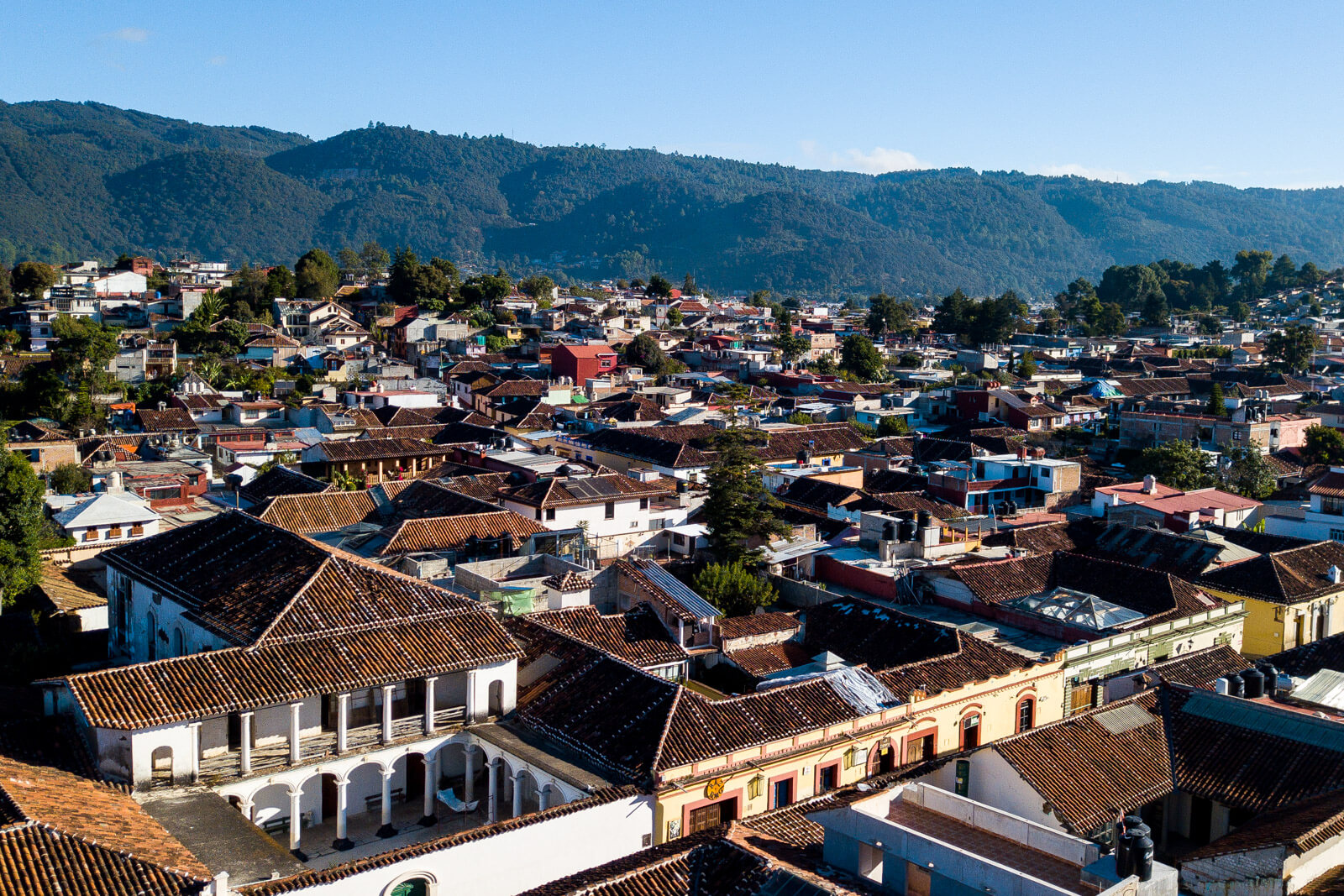 And yes, even though Palenque twon itself might seem down run and not very magical at all, there has been a rise of boutique hotels located near the bus station in an Eco-Touristy area called “La Cañada”.

From the Palenque bus station, you can take collective vans to the Palenque Mayan Ruins site for 20 pesos. Before you reach the entrance to the ruins, you’ll be charged a donation of 35 pesos meant for the protection of the natural environment of the area.

Entrance to the site and the museum is 5 USD in total, students, professors and the elderly enter for free. As usual with Mexico’s museums, every Sunday the entrance fee is waived for Mexicans and permanent residents. How cool is that? 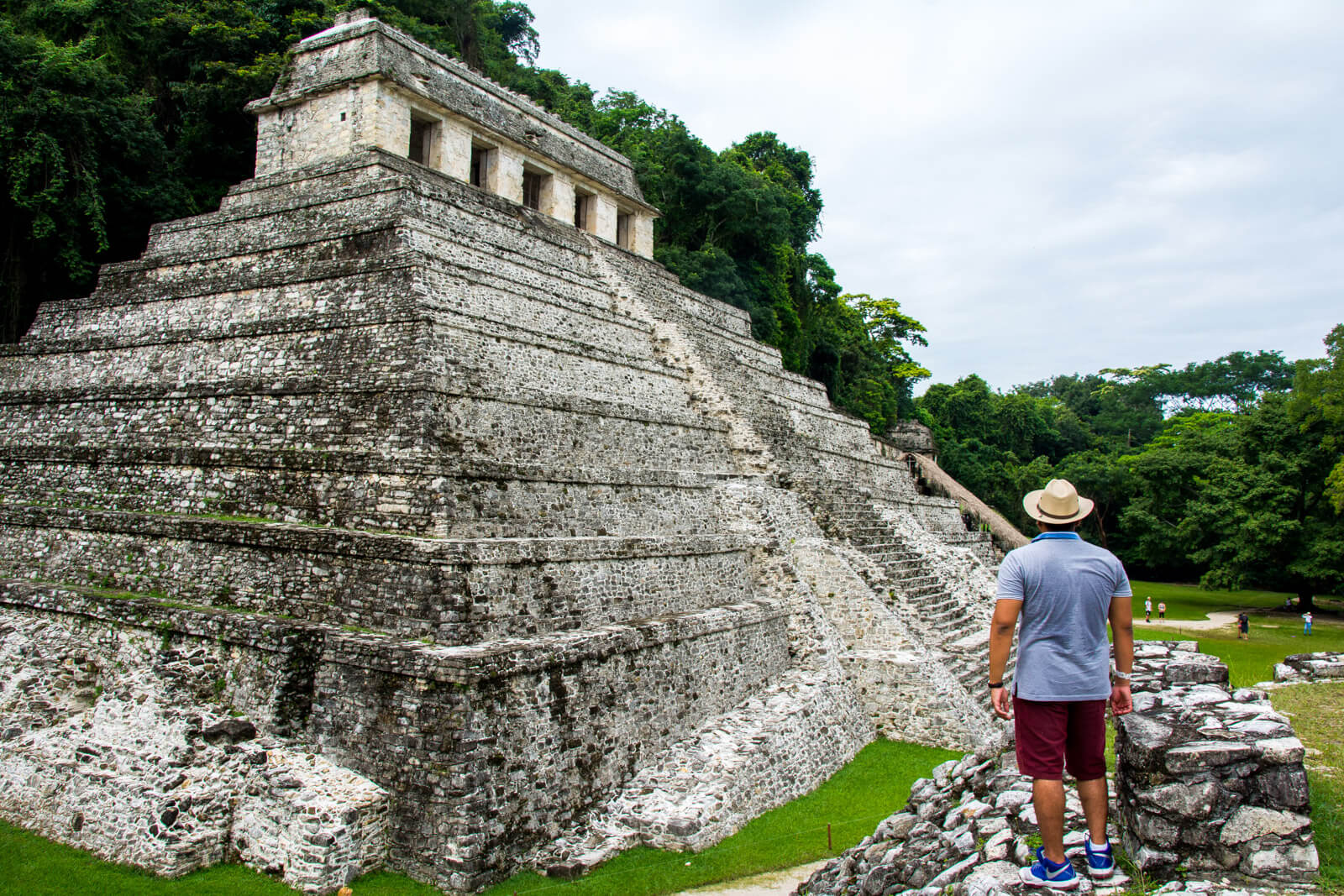 Contemplating the Pakal Palenque Pyramid. Photo by Every Steph

The Temple of the Inscriptions and the God-King Pakal

The Palenque Mayan Ruins, along with Tikal in modern-day Guatemala, is considered to be among the most important Mayan cities of olden times. Its population came close to almost one million inhabitants, which in turn lead to its decline since the natural resources of the area were just not enough to sustain everybody. Sounds familiar?

If you really want to climb and see every last piece of Palenque, you better bring a lot of water and energy since it will take you at least 4 hours to fully explore this wonderful site.

If you’re short on time, then you better focus on the four most important buildings of the area: The Temple of the Inscriptions, the Royal Palace, the Northern Complex and the Temple of the Cross. Death, Life, War and Religion, the four cornerstone of the life of the Mayan warriors. Quite a happy theme, if you ask me.

The Temple of the Inscriptions is the huge Pyramid that comes to mind when somebody mentions Palenque. Unlike most Mesoamerican Pyramids, this one didn’t function as a religious temple but rather, as a tomb. 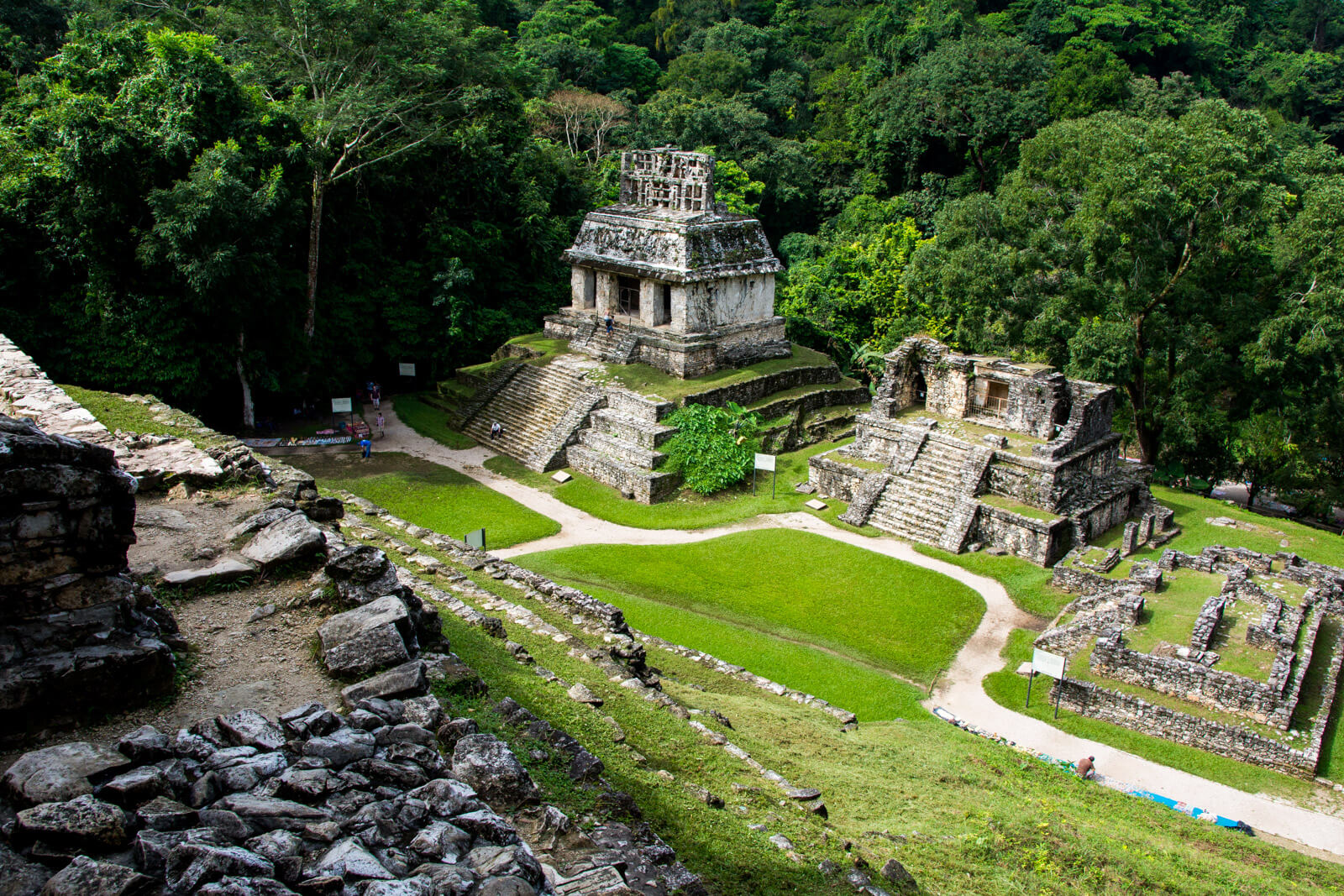 The view from the Temple of the Cross

Inside, people were able to gaze upon the remains of the ancient ruler Pakal, the God-King of the Mayan people. Yes, Xerxes wasn’t the only God-King in the history of humankind, you know…THIS.IS.PALENQUE!

Today, the tomb is closed down for good in order to preserve it (the sweat of the tourists was damaging the mural paintings).

Visitors can observe the original stone carved sarcophagus at the museum located on-site in Palenque while the remains of Pakal himself are located at the National Anthropology Museum of Mexico City.  Not exactly the Tutankhamen of Mexico but kind of close, right? Right? 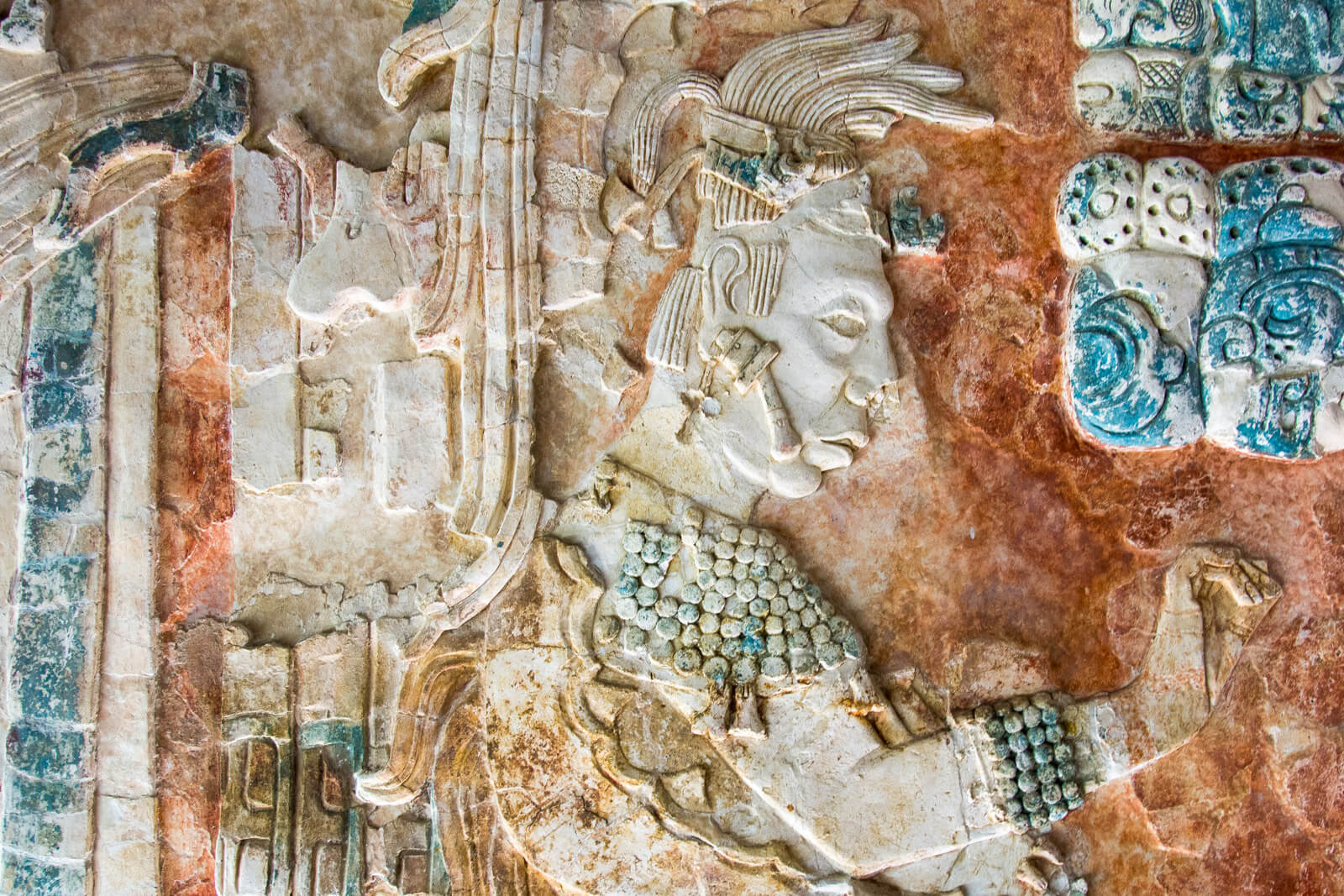 Mayan stelae at the Palenque Museum

Exploring the Palenque Mayan Ruins: all you need to know

The Royal Palace is the huge maze-like building located in front of the Temple of the Inscriptions. Here is where the Mayan royalty of Palenque used to live.

Today you can still find engravings detailing the daily life of the rulers of olden times (did you know the Mayans already had dentists during the 5th century?), just be extremely cautious when it comes to descending since some areas are very slippery, specially during rainy season! 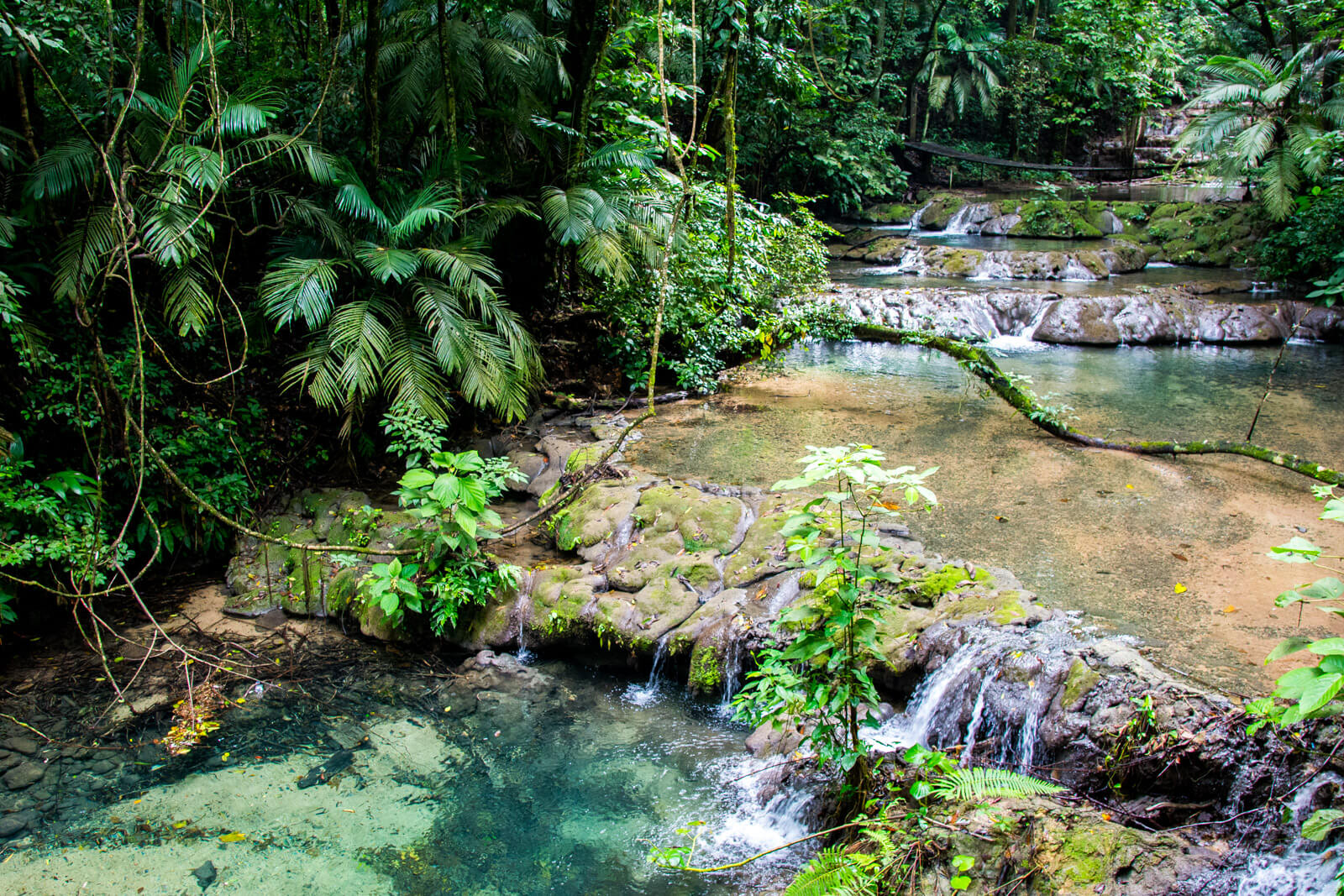 The waterfall located inside the ruins of Palenque

Outside of the Royal Palace you can find many souvenir salesman with outrageous prices. One of them actually tried to sell a drawing to a Japanese lady for over 300 USD! If you want to buy souvenirs, your best option is to do so before entering the ruins themselves.

That same drawing can be bought for less than 2 USD outside! What I do recommend you to buy is one of the Jaguar whistles, it’s a specially carved item that can faithfully reproduce the sound of the mighty feline.

Can you imagine using it to startle your friends once you come back from your trip? 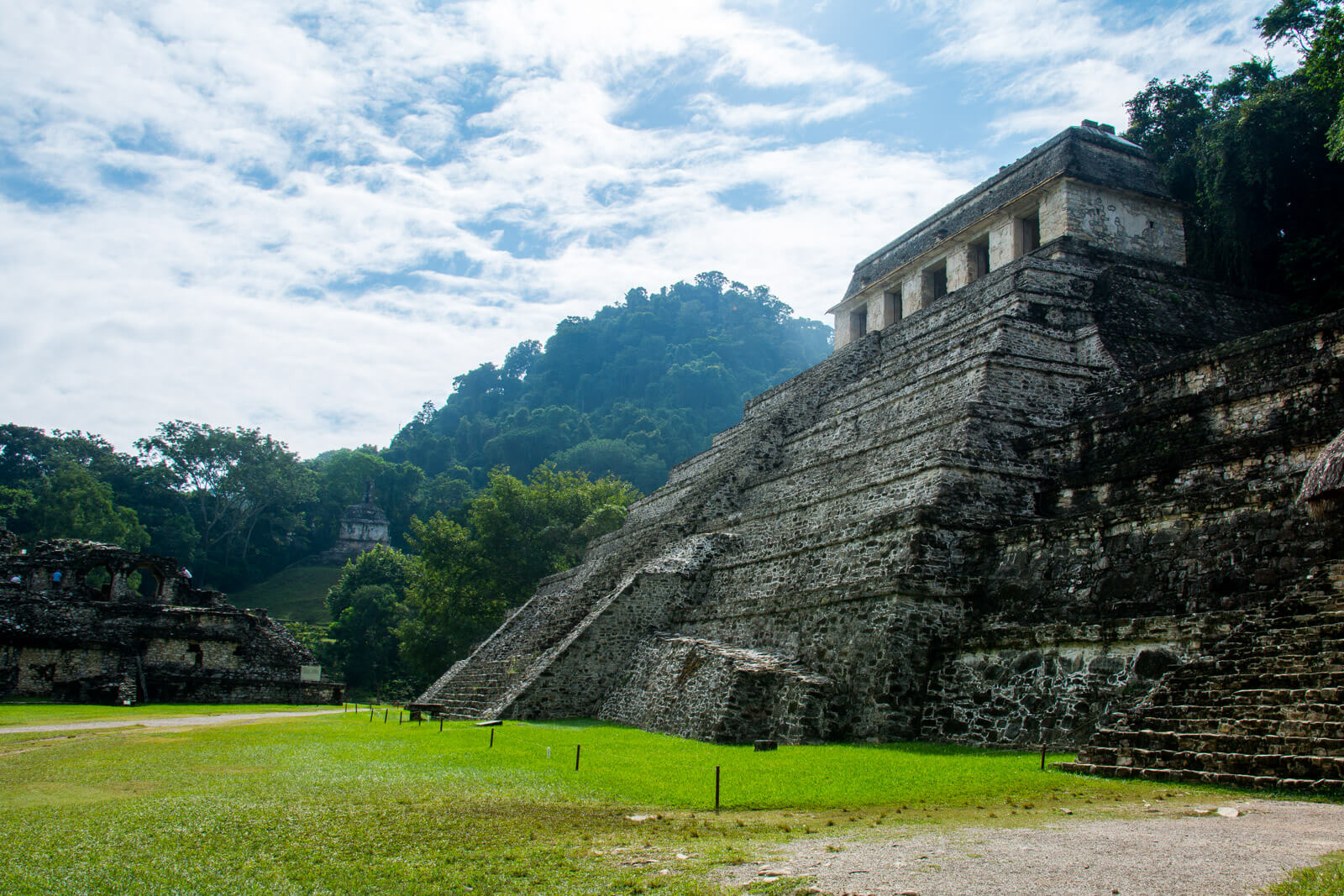 The majestic entrance to the ruins of Palenque

The ruins located at the Northern Complex feature carved stones with attributes that correspond to Mayan Warriors. They tell the story of the many wars that they fought against the rival cities of Tikal and Calakmul.

If you have watched Mel Gibson’s Apocalypto, you can get an accurate idea of what the mighty Mayan warriors were capable of. Don’t let their tiny size fool you, they were extremely fierce and deadly! Who ever said that size is important (other than a few of my exes of course)? 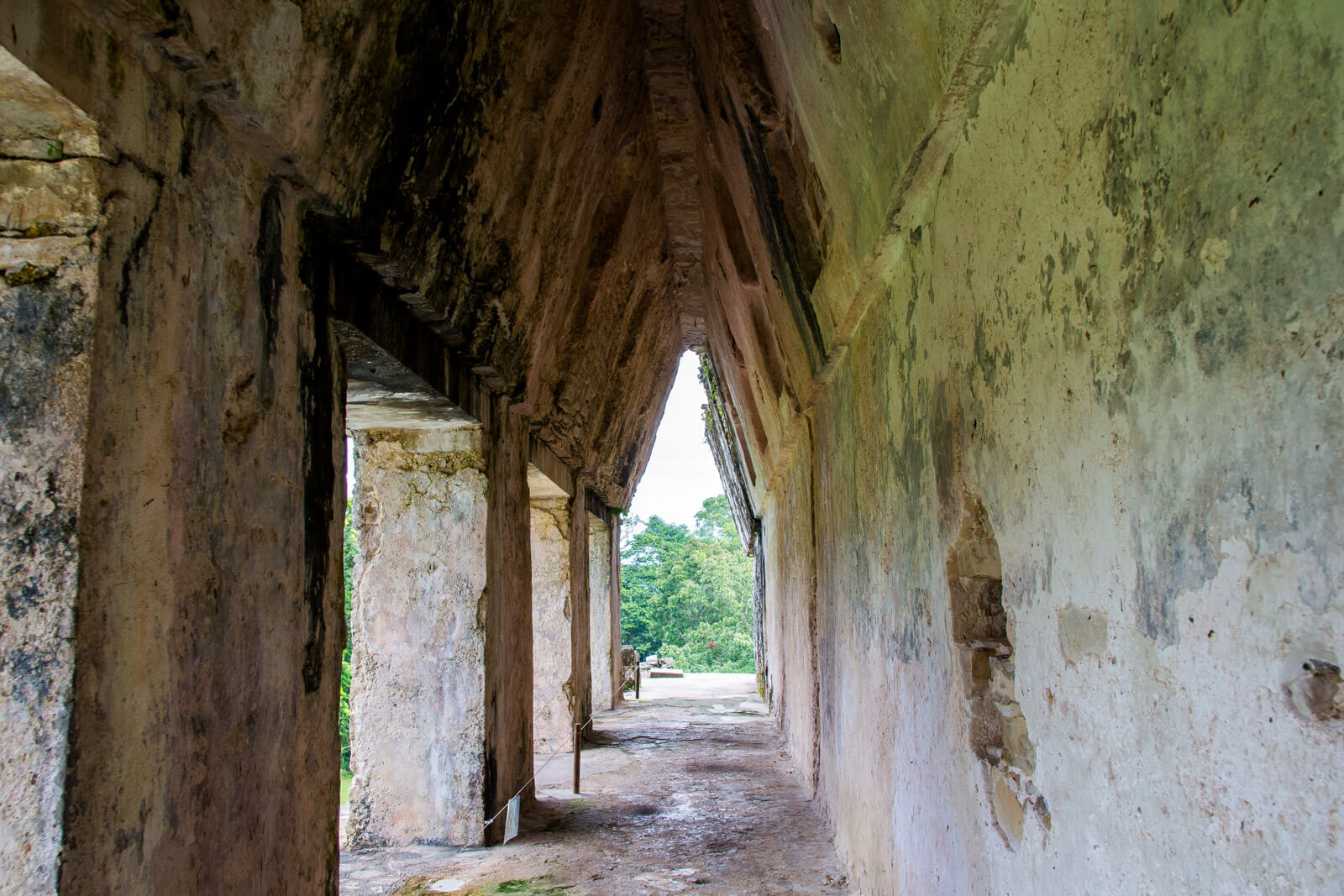 The inside of the Royal Palace at Palenque Chiapas

Last but not least you can climb the Temple of the Cross to get a panoramic view of the archeological site. This pyramid, as well as the small ones located nearby, was used as a religious center by the high priest and the royal family. If you get lucky you can even spot a spider monkey climbing through the trees.

As usual, be extra careful when climbing down, after all, the Mexican government prohibited visitors from climbing Chichen Itzá because of a couple of deaths that took place when people tripped. Don’t let the same happen to the Palenque Mayan Ruins! Think of the children that dream with climbing these ruins!!! 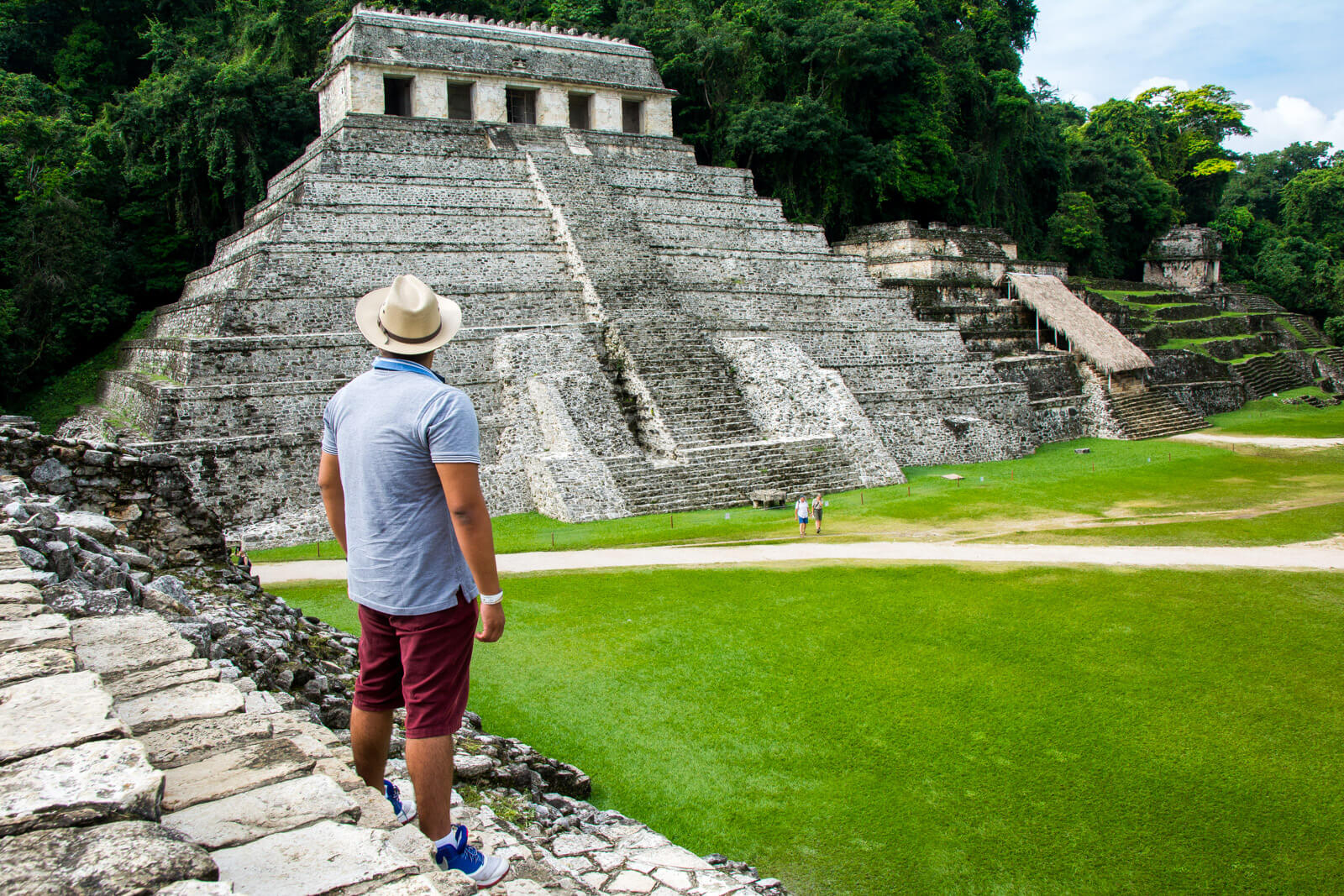 What Else to Do and See at Palenque, Chiapas

On the way out from the archeological site to the museum, be sure to visit the waterfalls located right next to the wooden bridge. While they’re not as amazing as the ones at Mishol-Ha and Agua Azul (more on that later), they sure are pretty to look at!

As I said before, there’s not much to do in the town of Palenque itself so my best suggestion is for you to visit the nearby waterfalls of Mishol Ha and Agua Azul. While you can take public transportation to Mishol-Ha (20-30 minutes from Palenque), getting to Agua Azul is trickier.

Your best choice is to go via an organized tour (about 10 USD for both waterfalls) or hitchhike with Mexican tourists that own a car. Just remember to avoid the paramilitary Zapatista group of outlaws!!! Now that I think about it, hitchhiking might not be such a good idea in this area of Mexico… 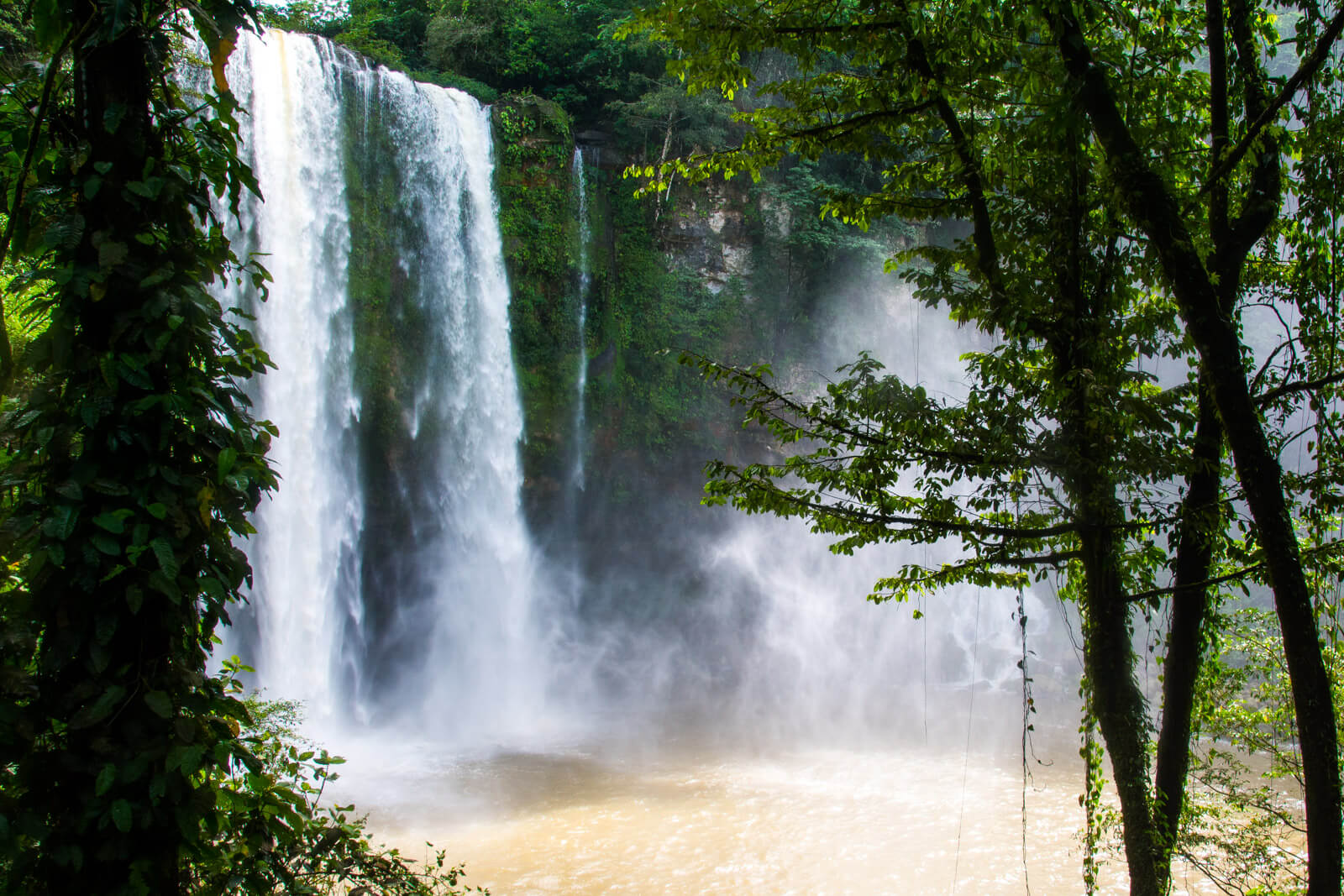 Another popular day trip includes a visit to the Mayan ruins of Bonampak, where you can find amazing color murals and to the ruins of Yaxchilan, where you’ll have to get on a local boat to transverse the wild river.

Alternatively, you can take a bus to Flores, Guatemala and explore Tikal on the next day. The Palenque Mayan Ruins are often considered as the gateway to the Mayan world of Central America and it truly shows! 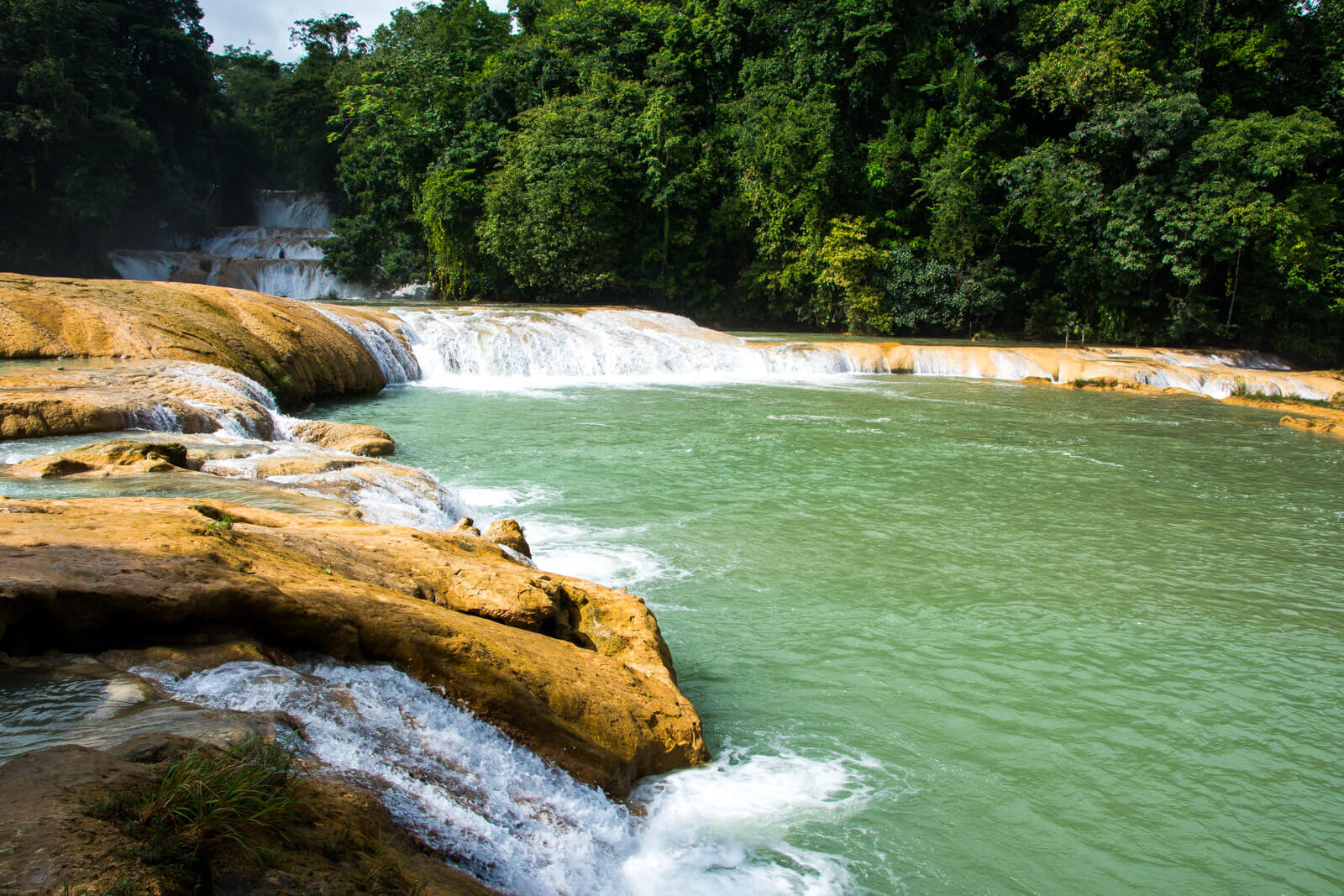 The Agua Azul Waterfalls of Chiapas

I hope you have enjoyed this article about the Palenque Mayan Ruins. Don’t forget to subscribe in order to get more awesome updates and tips straight to your e-mail!

Have you ever been to Palenque? Would you like to? Share your thoughts and let me know what you think of this amazing Mayan Pyramid! 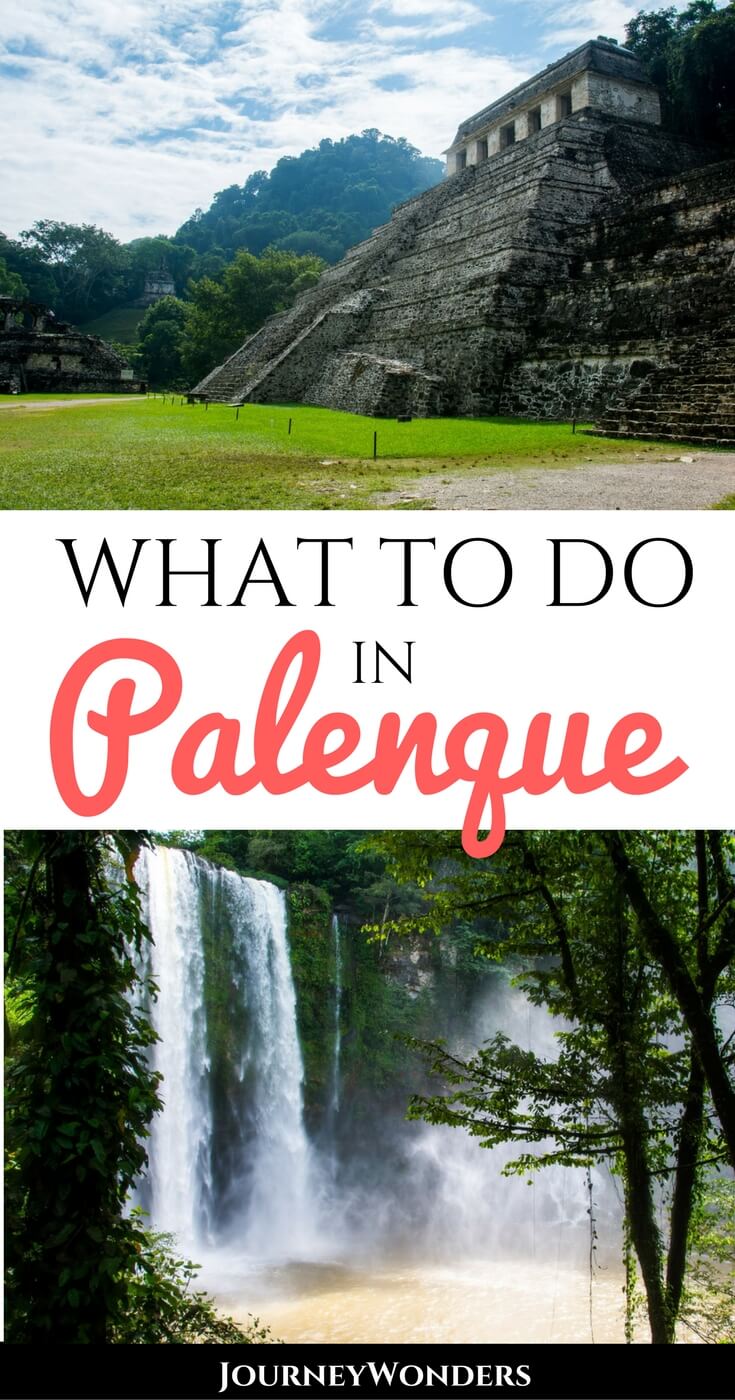